FOLLOWING upon the conclusion of the appeal process through Kildare GAA and then the Leinster Council on Wednesday night the way has now been cleared for remaining football competition for 2022 to be completed in Kildare. 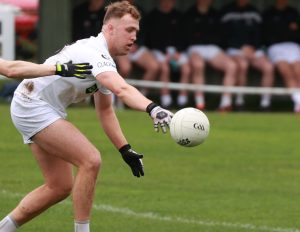 Senior county player, Shane O’Sullivan, will be in action for Clane in the Whitewater Shopping Centre U23A semi final on Tuesday next Photo: Sean Brilly

Sarsfields were unsuccessful in their appeal to the Leinster Council so Naas will advance to the semi final of the Whitewater Shopping Centre U23A Football Championship where they will face Clane on Monday night next, 5 December in Hawkfield at 7.30pm. The winners will play Maynooth in the final on Saturday week 10 December at 1.30pm in St Conleth’s Park.

The saga began when extra time wasn’t played by the Referee when the quarter final meeting between Naas and Sarsfields on Saturday 12 November ended level. Following upon the Referee’s report, where Naas were awarded the game, Sarsfields, as was their right, brought their case through the Kildare GAA process and then onto the Leinster Council.

It was a unfortunate that, what is an excellent competition,  became mired in controversy and that a solution could not have been found to conclude the game on the pitch.