HE might have enjoyed a rollercoaster autumn in the green of Ireland, but Eadestown’s Jimmy O’Brien is adamant there is still plenty of scope for his game to improve. 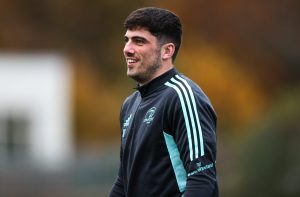 After initially being selected to start on the right-wing for Ireland ‘A’ in their clash with an All Blacks XV at the RDS on 4 November, an injury to Robbie Henshaw saw O’Brien added to the bench for the main international side’s test encounter against South Africa on the following day. Although it was anticipated that O’Brien would get a short run-out in the closing stages of the game, the enforced withdrawal of Stuart McCloskey saw him thrust into the action on 27 minutes for his Irish senior debut.

While McCloskey made a quick recovery from an arm injury, O’Brien’s versatility saw him starting at full-back and left-wing respectively in subsequent showdowns with Fiji and Australia at the Aviva Stadium. Despite contributing to Ireland wins in these fixtures, he wasn’t particularly pleased with his own performances – something his fellow Kildare native and housemate Will Connors was more than happy to concur with.

“I wouldn’t be the personality to get carried away I don’t think. Honestly I wasn’t too happy with how I played in the last two games. I won’t get carried away anyway. I’ve Will telling me every time I go home that I was crap so that will keep my feet on the ground,” O’Brien remarked at a Leinster media briefing in Old Belvedere RFC earlier this week.

Having missed out on a test appearance during the summer tour to New Zealand – though he did play both midweek games against the Māori All Blacks – O’Brien was uncertain if he was going to make the breakthrough during the Autumn Nations Series. When he finally received word that he was in line to make his bow, the 26-year-old was seemingly the last of his inner circle to hear about it.

“I didn’t know if I was going to get it, to be honest. I obviously wanted it and I thought I was training well, but then when I got picked for the ‘A’ team I was actually kind of low. I was like ‘ah crap.’ I thought I had a chance and then you don’t know how far down the depth chart you are in there. I heard when Robbie [Henshaw] pulled out and I didn’t even know.

“He [Farrell] had supposedly rang Hugo [Keenan] to ring and then Will Connors to get my parents. So my parents knew before I did. They were getting called to drive up to Dublin to come in for a jersey presentation. I had no idea. So, I go into the Shelbourne and Faz told me there.

“I ring my parents and my parents are actually downstairs in the Shelbourne acting all surprised. I was ringing them being all like ‘I’m on the bench this weekend.’ They were like ‘aw, amazing!’ And they were downstairs ready to come up!”

In addition to covering the back-three and midfield, O’Brien also has experience of playing out-half from his days as a gifted schools rugby player in Newbridge College. Though he hasn’t donned the number 10 shirt in the professional ranks, he is often thrown into the position by Stuart Lancaster in Leinster training sessions.

For many people – across a variety of team sports – the constant switching between different roles is seen as a hindrance. Yet given how the past 12 months have gone for him with both province and country, O’Brien has come to recognise his adaptability as a virtue.

“I don’t really mind it at this stage. It’s kind of why I am getting picked, I think. People have been saying it and asking ‘aw, do you not want to focus on one or what one is your favourite?’ I honestly don’t have a favourite.”

“I just want to be playing. When I’m playing, I don’t just stick to one position or anything like that. I think I pretty much just go out and play pretty much the same if I am playing 13, wing or full-back. I don’t think it changes too much how I play.”

O’Brien was one of several Kildare men to feature for Ireland during the autumn, with Cian Prendergast (Suncroft) and Jeremy Loughman (Athy) both making their senior international debuts in the 35-17 victory against Fiji on November 12.

Additionally, Loughman’s fellow Athy compatriot Joey Carbery appeared as a late replacement in the previous week’s test success at the expense of South Africa and also started the Fijian game before being forced off with an injury that ruled him out of facing the Aussies.

Tadhg Beirne was also a near ubiquitous presence in the Ireland second-row and despite growing up a stone’s throw away from the Munster forward in Eadestown, this was O’Brien’s first experience of being his team-mate in a rugby context.

Up until now, they have been on opposite sides of the coin in fierce interprovincial derbies.

With any luck, this will soon become a more common occurrence for O’Brien and Beirne.