All Stars A Success Programme In The Making

WE carry a feature on the Kildare All Stars Programme featuring St Kevin’s, Rathcoffey and Caragh GAA clubs in this week’s Kildare Nationalist.

THOSE of you who attended the Kildare County Football Final on the 9 October will recall a group of athletes, The Kildare All Stars, showing of their abilities in a half time exhibition match in St Conleth’s Park, despite the dreadful weather conditions on the day. 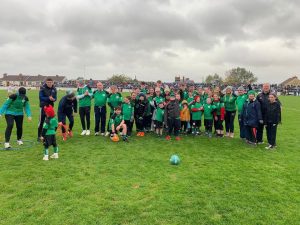 These athletes didn’t just turn up on the day and it is important in this Kildare Disability Week to recognise the journey that these athletes have been on and the one they hope to travel on in the future.

The All Stars is a sporting and social ability programme framed within the GAA with the activities led by the athletes according to their ability .

Sinead Heneghan, Coordinator of the Kildare All Stars, takes up the story. “It all started in St Kevin’s GAA in 2021. One of my children, James, has Downs Syndrome. James is 13 and he used to train with my other son, Myles’ team but as time went on it became obvious that this was not suitable for him unless he could keep up with the team. A “discussion” started on how to accommodate players like James and in fairness to St Kevin’s they agreed to support an initiative for players with additional needs. Aisling Cronin and I took up the mantle and so the programme began,” Sinead explains.

A big plus for the fledging group was the decision of St Kevin’s to allocate the Astro Pitch from 6pm to 7pm every Friday night. “This was a very significant gesture of support as we wanted this activity to be part of the general activities in the club; this is what inclusivity is all about.”

It was quickly realised that there would be insufficient players for St Kevin’s to run the programme on their own, so they approached Rathcoffey GAA. “I spoke with Sean Moriarity, Chairman of the club, and he agreed to come on board immediately. Anne Marie Proctor from Rathcoffey GAA became the point of contact for the club. The support of Conor Herbert, Kildare GPO for St Kevin’s and Rathcoffey,who designed programmes for the athletes, and attends every two or three weeks to lead sessions” Sinead explains.

Next was the task of identifying suitable people who would come on board as coaches and because of the nature of the programme nurses, Gardai, teachers and SNA’s all came on board and were vetted and suitably trained to become coaches on the programme.

“Next up we built a transition year programme and promoted it different schools and seven schools came on board and they are a huge part of what we do now,” Sinead Heneghan explains. “These students have stayed with us and keep coming and this is a benefit to the wider society as these students will soon be in the work place, becoming employers and they will have no fear of employing people with disabilities.”

Caragh GAA then came on board and the programme is helped by Dermot Lavin, a member of Caragh GAA, who is the Children’s Officer with Kildare GAA. “A natural triangle between St Kevin’s, Rathcoffey and Caragh, Siobhan Heneghan says. “We have 40 athletes registered and we have 35 coaches. Some of these athletes couldn’t get out of the car at the start but they now display a level of independence and one of the athletes has taken up hurling. Fiach Andrews, the Disability Officer with Kildare Sports Partnership, has been very supportive in offering sporting opportunities along with training programmes for the coaches.”

Sarsfields run an All Stars programme on Saturday mornings from 10am to 11 while St Laurence’s run theirs on Saturdays from 9am to 10 although Siobhan Heneghan recommends clusters for clubs outside the larger urban areas.

Noel Mooney, Games and Coaching Manager with Kildare GAA was instrumental in organising the half time exhibition on Co Final Day along with Conor Herbert and although a planned half time exhibition in the Kildare V Mayo game in Croke Park had to be postponed because of the lateness of the throw in, the Dublin V Kildare Allianz League game in Croke Park at the end of January is now being targeted.

Plans for the future include a meeting with Kildare GAA with the hope of the Co Board adopting a cluster programme model for the All Stars with the hope of establishing eight All Star Programmes in the county.

To emphasise the importance of the All Stars Programme to the athletes this is what a parent told the Kildare Nationalist this week.

“When our son started in all stars, we were unsure about how he would settle in. Within weeks he was looking forward to Friday evenings. A few months later our youngest daughter started to participate in the training and our eldest girl became a mentor. They all look forward to Friday evenings. I am so happy that my son and youngest daughter who both have learning difficulties have found a great way to make friends, develop football skills and that our eldest girl has been able to join her siblings in helping them.”