IN this week’s Kildare Nationalist, in your shops now or online at www.kildare-nationalist.ie, we carried a feature interview with Athy and Kildare’s Kevin Feely and we reprise that interview here.

ANY worries that Kildare supporters might half that the talismatic Kildare midfield, Kevin Feely, might not be recovered in time to take his place in the Kildare ream at some stage in 2023 can be firmly dispelled as the Athy man has declared himself “ready, willing and able” for early in the New Year. 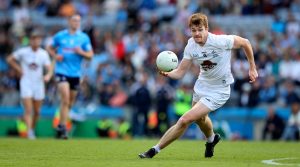 The Physio practitioner in Tallaght and now a part time lecturer in DCU, feels that progress on his Achilles injury is “really good and it is on track or slightly ahead of schedule at the moment.” At the back of his mind is a return to action at some stage in the Allianz League of 2023.

Feely has been unlucky with injuries in the past few year and the latest, an Achilles rupture in the championship match against Eadestown, is the latest that has befallen the midfielder. “I felt a sensation at the back of the ankle and initially I thought that someone kicked me. I accused Emmet Bolton, who was standing behind me and he looked at me like I had three heads. I knew then from experience that it was an Achilles rupture,” he explained.

A procedure under surgeon, Johnny McKenna, allowed the 30 year old to begin rehab immediately and the news was positive from the surgeon so that put him in a positive mindset as he began the road to recovery.

It was hard for Feely not to have negative thoughts about his playing future but the experience of the knee injury the previous year equipped him to deal with the latest setback. “I have a good circle of friends to talk to and help me but I was much better prepared and more ready and prepared because of the previous injury, “ he explains.

Looking back on 2022 from a county team point of view Feely sees it as “frustrating and huge opportunities lost. We had good results in St Conleth’s but we didn’t do enough to stay up. It wasn’t until the Mayo game in Croke Park that we really peaked in that regard. Even at that stage some of the players didn’t have enough game time in the legs to maintain it against a high quality opposition like Mayo. We left a couple of points in Tyrone that probably would have saved us. I look back at how small the margins are,” he says.

“We had players finding their feet and players coming back from injury and we had a new management. A huge number of players were tried in the League and they did brilliantly as they were new to that experience. For the most part everyone did really well but it probably meant that some other guys didn’t get match preparation then for the championship.”

“We nearly got it right towards the end and there is enough for this group of players to build on that. As a Players Group and as a Management there is huge optimism that we can achieve our goals and put together a more competitive championship campaign again,” he believes.

Feely gives credit to Mayo who he says are the ultimate battlers and warriors and will fight till very end.

!The return of experienced players had a good effect in the Mayo game as they brought a bit of experience and calmness that probably was missing in the Leinster Final.”

“There was a big scar left from the Leinster Final but the Management team put a lot of focus on preparing the minds for the Mayo game. It was a feeling you don’t want to experience again. The Management did a great job of mentally preparing us and not dwelling on what happened in the Leinster final instead using the hurt of the Final as a kind of springboard for the next game and they did a really good job in getting us ready,” Feely adds.

Kevin Feely is now playing under his third county management team but he is enjoying the experience. “Getting used to each other was part of the process, We both had to get used to each other; different styles of training, style of play, style of management that comes with that. The three managers that I have had have all had very different approaches but they have all been successful in the own ways,” Feely says.

“I think this year we will know each other a little bit better so we should see a big improvement this with the new management that has come in. Obviously they are hugely respected within Kildare and they have so much knowledge to impart; we just have to make sure we use everything they can teach us.”

Feely sees a difficult National League ahead but a campaign that Kildare should not be afraid of. “Dublin, Derry are two really quality teams, we are under no illusions about that and we have our old friends Clare and Meath. There will be no easy game and we know that as we have played many a game in Division 2. If we are not mentally prepared and in the right shape we’ll get turned over. We have to put a big emphasis on making sure that our performances are up to scratch and that we put ourselves in a position to, at the very least, to be in a scrap for promotion,” he believes.

He also sees the possibility of a Tailteann Cup as another threat for the team.

Kevin Feely sees that some of the criticism of Kildare is unfair. “It probably come off the back of the amount of underage success that we tend to have in Leinster and in the the All Ireland recently. It throws up the argument of how we cannot transfer that into a consistent Division 1 team. We are a team of great potential but haven’t fully realised it yet,” he believes.

From an Athy point of view Kevin Feely is looking to build on the success of 2020 but injuries to David Hyland, Niall Kelly and himself have hampered that progress. A fully fit Athy team can challenge Naas, he believes.

Athy and Kildare can look forward to a fully fit, determined and focused Kevin Feely in 2023.