Cherish Naas And Hope The Rising Tide Lifts The Flotilla

IN this week’s Kildare Nationalist, in your shops now or online at www.kildare-nationalist.ie, The Supporter column looks at the Naas performance against Ballyhale Shamrocks and hope that the Naas story will raise standards throughout the county.

There is certainly a familiarity to a Kildare team going up to Croke Park, brewing up an early story to raise hopes and heart rates only for the wind to escape their sails by half-time. A couple of early third-quarter goals conceded and you’re thinking of getting a head start on the traffic.

“Nothing of the sort,” I reply. 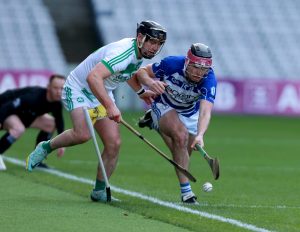 Naas were rank outsiders and let’s face it were always going to lose to Ballyhale, for all their schooling at underage level as guests of Cat country, there are very few teams who can live with Shamrocks, and while the Naas graph is sharply upward odds of 9/1 against were a fair reflection of their status.

Tom Mullally’s men simply haven’t built up the experience of playing at the high-octane level of hurling that Shamrocks have. They were able to sleep-walk through the Kildare championship since Covid, despite the best efforts of Celbridge and Maynooth in the last two finals and it was only last Spring that they escaped the Intermediate grade with that win over Kilmoyley.

But the confident disposal of Offaly’s Shinrone suggested they would not be overawed and their panel has built up a decent level of Croke Park experience – a largely positive one crucially – with that Intermediate run, not to mention the Christy Ring wins that so many of the panel contributed to.

Mullally no doubt relished the challenge of going up against the five-in-a-row kingpins from his own county, and like cattle released from the barn after winter his team frolicked around the Croke Park pitch in the early stages. By God did they look like they belonged.

“Beyond the scoreboard they outworked us, outmuscled us. They were bullying us around the middle of the field. We had inter-county players being pushed around the place. Naas are a big, physical, athletic team and they really proved it.”

Hurling, though, is not a sport that favours the underdog, particularly the way it has evolved (improved? – well that’s for another debate) with scoring rates and distances through the roof. This isn’t football where catching a favourite asleep and roaring into a 1-3 to nil lead gives you something to hold if you have the defensive trap and enough of the dark arts suitably rehearsed. Particularly in winter.

No, not so easy in hurling, particularly on the famous carpet of headquarters. November or July, same difference.

And yet… there was plenty of room for what-ifs and most of them centered around the man between the sticks for the Kilkenny men.

Older readers will recognise the name Jan Tomaszewski. Hard to believe it now when all bar a few small island nations don’t make it through to the main event, the likes of Solomon Islands, Malta, and Ireland, but for the 1974 version only sixteen teams were awarded the golden pass including hosts West Germany.

Only eight teams qualified through the European preliminaries and rank outsiders Poland went to Wembley needing a draw to edge out England, the World champions eight years previously. Somehow, they got the draw, thanks largely to a wildly eccentric goalkeeping performance from our man Jan.

“He hurled himself arms, knees and bumps-a-daisy all over his penalty area like a slackly strung marionette,” wrote the brilliant Frank Keating in the Guardian. “And all with a half-taunting, half-surprised smile which made one think this might be his first-ever game.”

Brian Clough famously called Tomaszewski a “circus clown in gloves” in the ITV studio before the game, but no one would suggest something similar of Dean Mason, the Ballyhale goalkeeping hero from that frenetic opening on Sunday.

Before Cathal Dowling finally snaffled a deserved goal for our county town boys, Mason had pulled off a hat-trick of saves to deny Brian Byrne twice and a re-invigorated Jack Sheridan. So good to see Jack back in form after a difficult enough year. Only eight minutes on the clock and if a couple of those earlier attempts had found their way to the net my theory about hurling outsiders might have really been put to the test.

As it was, class and experience of course won out with the writing on the wall once TJ fired that penalty home, despite Cormac Gallagher’s best efforts. The dream had lasted twenty minutes but plenty of Kildare teams haven’t lasted that long in HQ.

Remarkably this was the first defeat in championship hurling for Naas in over three years. I was in Callan that day where a soft November sod wasn’t enough to level the playing field against the Kilkenny Intermediate champions Tullaroan.

A few short years on and here were Naas going toe-to-toe with hurling royalty.

Naas GAA have put plenty of pride back in the GAA scene in Kildare with their school exploits, the Intermediate campaign and now a valiant effort in the Leinster senior. The challenge now is to maintain and indeed ramp up another level outside of local competition.

The footballers were very disappointing against Kilmacud and in Mullally’s words “today there’s gaps between us and the Shamrocks, and it’s whether we can stick together is the first thing; secondly whether we have the ambition to close those gaps.”

Whether the development of a “super club” in the county town is good for Kildare ultimately is another question. In the past when teams dominated, they were either cyclically-successful rural clubs (Carbury, Clane, Raheens, Éire Óg, Ardclough) or one of the two Newbridge clubs who would keep each other honest.

We haven’t had a one-club large town team dominate the scene in the way Naas are doing, and certainly not in both codes. We’re on the record here suggesting that a second club for the town (and one for Maynooth in the future if the County Development Plan is anything to go by), should be under consideration but it’s similar to the “split Dublin” debate and there will be few willing to grab that particular bull by the horns.

For now, we should cherish what Naas have become in a very competitive sports market in the town and hope that their rising tide lifts the rest of the flotilla.