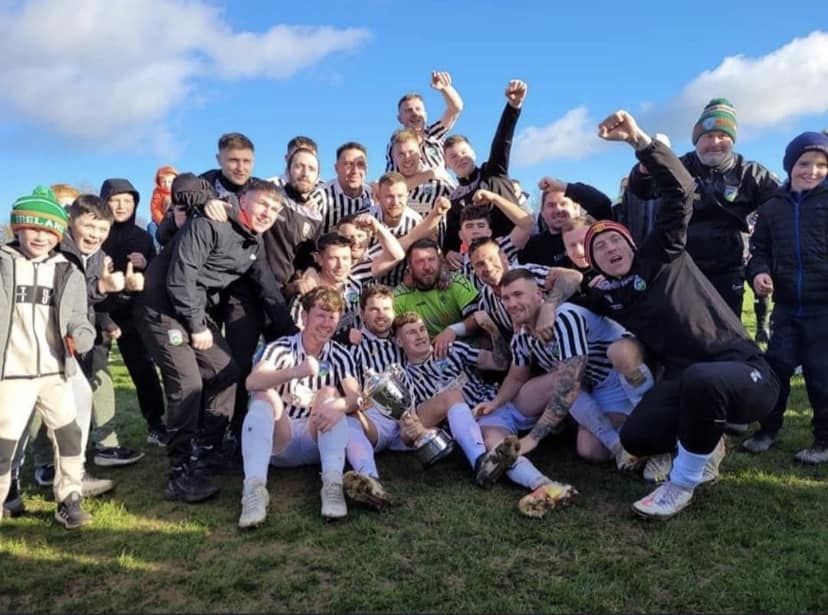 The local newspapers headlined Clonmullion’s AFC latest victory as Clonmullion’s Magical Treble’ while another newspaper more sedately described the winning of the Senior Division Cup Final as Record for Clonmullion.  The soccer match played in Clane saw the Athy team defeat the Coill Dubh AFC team on the score line of 3 goals to nil.  It marked the end of an extraordinary season which saw Clonmullion AFC become the first team in the Kildare Division Football League since the League’s foundation in 1994 to complete the treble of Senior Division League Champions, Lumsden League Cup Champions and by virtue of the win in Clane, Senior Division Cup winners.

The Clonmullion Soccer Club, founded in 1995, known locally as ‘The Mull’, has succeeded remarkably well, particularly so in recent years and this year’s treble success marks a new high for the club which had to wait until tens years ago to have a clubhouse built next to their Clonmullion pitch. The club chairman is Joe Robinson and club secretary/treasurer is Eddie Hennessy, both of whom, with an energetic club committee has overseen the great strides made by Clonmullion AFC in recent years.

The current senior team is captained by Michael Lawless who received the Karina Donnelly Cup on behalf of his teammates as winners of the Senior Division Cup Final. His teammates are Keane Cully, Jonathan Fennell, Timmy Doyle, Mark Hughes, Gary Comerford, Lee Doyle, Nathan Robinson, Cody Mulhall, Jodie Dillon and Danny Thompson.  Substitutes on the final match day included Nathan Germaine, Lee Day, Evan Phillips, Lee Foley, Corey Moore and Richie Moriarty. The victory was secured by goals scored by Cody Mulhall, Jodie Dillon and Lee Foley who scored the last goal within a minute of his introduction during the closing stages of the match.

All of the team members are talented players, but I might be excused if I mention one player who has been the subject of a previous Eye on the Past. Cody Mulhall, grandson of my friend Ber Foley and son of Ber’s daughter Caroline, from an early age displayed a wonderful footballing talent. It’s a talent which he now displays in the Clonmullion team shirt as the team vice-captain and true to form it was Cody’s goal in the 19th minute of the game in Clane which set the Clonmullion team on the way to a historic win. Cody won international caps at U-16, U-16 and U-17 and previously played for Hibernian in the Scottish League, Shamrock Rovers and Longford Town in the Irish Premier League.  He has formed a prolific partnership on the Clonmullion team with Jodie Dillon.

The longest serving player on the team is Ross Cardiff who has played for Clonmullion for 15 years, while the most decorated player in the history of the Kildare League and Clonmullin’s oldest player is the inspirational Timmy Doyle. Two other players with League of Ireland experience are Mark Hughes and Gary Comerford, both of whom joined the Clonmullin club last year. The management team for the club’s most successful season ever were Brian Kenny, Barry Hughes, Martin Redmond and Derek Brophy.

Congratulations to the players, mentors and members of Clonmullion AFC on a wonderful season which has brought them a remarkable and history making success. Congratulations also to the Castlemitchell girls’ minor team which on the same day as the Clonmullion AFC win were victors in their final. The girls team was captained by Erin Brereton Foley, who played for the Kildare County Minor team which won this year’s Leinster championship.  Also on the Castlemitchell team was Amy Larn who captained the Kildare County minor team and has been selected for the Ireland’s women 7’s rugby squad.

Some weeks ago when writing Eye No. 1557 I drew attention to Dara English, captain of Athy’s U-16 championship winning team and his great grandfather Tommy Buggy who was a member of the Athy Senior Football Championship team of 1937. I did not realise when writing the article that the goalkeeper for the Under 16 team was Rory Chanders whose great great grandfather was the legendary Patrick ‘Cuddy’ Chanders who played in goal for the Athy championship winning teams of 1933 and 1934.  Cuddy was also the goalkeeper on the Kildare Senior County team between October 1934 and August 1935. However, he was sensationally dropped for the 1935 All Ireland Final which Kildare lost to Cavan.  Cuddy was a substitute on the Kildare team for that All Ireland Final, as was his Athy teammates Jim Fox and Barney Dunne.  Athy footballers who played in that final were Tommy Mulhall and Paul Matthews, with Paddy Martin and Patrick Byrne, both from Castledermot. Cuddy was allegedly not selected for the final because it was claimed that the Kildare selectors wanted a collar and tie man for the USA trip which was to follow the expected Kildare victory.  Cuddy was restored as the county goalkeeper two months later and featured for the last time in the county colours in 1936. Interestingly it was another Athy man, Johnny McEvoy, who featured as the County Kildare senior goalkeeper between 1937 and 1939.

Athy has an enviable history in terms of sporting successes over the years and 2022 has seen Clonmullion AFC, Athy GFC and neighbours Castlemitchell add to that long list of successes.