THEIR clash with Sarsfields finally resolved in the committee rooms, Naas returned to the serious business of challenging for titles at a wet and cold Hawkfield as they dethroned Whitewater Shopping Centre U23 A champions Clane in an entertaining last four encounter on Monday night. 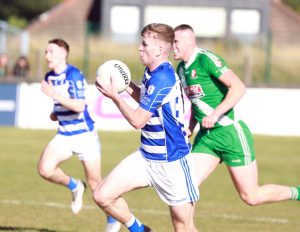 It was a repeat of the county senior final and both sides were able to call on plenty of players from that occasion, but a goal-hungry Naas had too much forward power for a Clane side who were missing Shane O’Sullivan through injury and suffered a further blow with star defender Harry O’Neill forced off before half-time.

Naas it must be said had their own absentees with Jack McKevitt and Kevin Cummins to spring to mind but in Club Senior Footballer of the Year Dermot Hanafin they had the outstanding player on the field, though Alex Beirne, Luke Griffin and Neil Aherne were also on song in a potent attack.

Adam Fanning opened the scoring for Clane with a well-taken point after just over a minute, but Naas took control of matters with 1-3 without reply before the tenth minute.

Corner forward Aherne opened their account, burying a shot to the bottom of Cian Burke’s net and Hanafin could have added a second when a superb dummy sent him clear in front of goal. Discretion won out and he took his point.

Griffin registered their third point before Beirne fired over from way out on the left wing.

Clane needed a score at that stage. Sam McCormack provided it and after Beirne scored another beauty to restore the six-point gap, the men in white had a good spell with an outstanding point from advancing centre-back Daniel Reilly followed by a free from McCormack after a foul on the lively Oisin Tighe.

That made it 1-4 to 0-4 but Naas came back at them again with a mark from Aherne and a Griffin free before Fanning’s angled point for Clane made it 1-6 to 0-5 at half-time.

There was a good balance to the early second half exchanges but after a point from Tighe, Naas found the Clane net for a second time. Billy Byrne won a possession against the odds near the sideline and fed Hanafin. The Maynooth University student breezed through again, this time burying his effort to the top of the net at the Milltown end.

Immediately afterwards the same player was put through again by Byrne and settled for his point to leave seven points between the sides.

Points from Cian Shanahan and Fanning, the latter from an acute angle, gave Clane a foothold but when Griffin pointed after a Beirne run the county town side retained a comfortable six-point advantage.

The game developed a helter-skelter quality in the second half, though, and when McCormack launched a high ball into the Naas goalmouth, midfielder Sean Callan did well to gather and shrug off his marker to fire low to Jack Rodgers net.

That put Clane right back in the mix, despite Hanafin replying with a free and just three minutes after Callan’s goal, good work from McCormack and Fanning sent substitute Keelan O’Connell through to fire them right back into the game with another major.

That made it 2-9 to 2-8 in favour of Naas but with ten minutes remaining great work from Aherne in the left corner set up Tom Browne for their crucial third goal. Hanafin was then dragged down by Daniel Reilly, who was lucky to avoid a black card and Griffin pointed the 52nd minute free.

A minute later Aherne was the provider again, deftly chipping the ball into his hands on the run before handing Griffin the opportunity to bury goal number four.

Jake Burke and Hanafin exchanged points as the clock wound down and in the final minute a frustrated Callan was black-carded. Referee Ryan Moran didn’t want to prolong the Clane agony, blowing up right on sixty minutes. He clearly hasn’t been watching the World Cup.

Weather permitting, Naas will meet Maynooth in Saturday’s final in Newbridge. On this evidence they’ll be very hard to beat.