PUNCHESTOWN  Racecourse announced on Wednesday that Tote Ireland are to spread festive cheer to one and all with complimentary entry to the popular New Year’s Eve race meeting at Punchestown on Saturday 31 December. 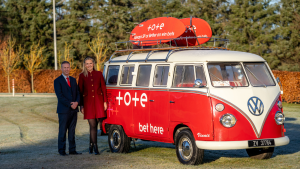 This will be the first in a three year deal that sees Ireland’s only pool betting operator for horse racing open the doors and welcome racegoers to the home of Irish jump racing for a free afternoon of great sport and festive entertainment. The complimentary entry is a further enhancement on Tote’s involvement at the popular meeting where in the past they have distributed free race cards on arrival. For the upcoming fixture on 31 December, in addition to no-fee entry, Tote Ireland also invite punters to join them in the Tote Hall for Spin the Wheel spot prize giveaways through the afternoon. Lots of prizes to be won the day such as Punchestown membership and race day tickets.

General Manager of Tote Ireland Ross Kierans expanded on the initiative, “Like so many involved in the racing industry, all the team at Tote Ireland were delighted to see racegoers return to track in 2022 and to close out the year with complimentary admission for all at Punchestown for their New Year’s Eve race meeting. We are already looking forward to an action-packed racing calendar for 2023 and extend best wishes to all our staff and customers this Christmas and for the New Year.”

Leona Hughes, Punchestown Sponsorship Manager said  “The New Year’s Eve Countdown race meeting is a local favourite and racing tradition. There is a great atmosphere, everyone’s in good form, the Punchestown team meet and greet race goers with festive treats like mulled wine and mince pies on arrival. We all know that life has become expensive in recent times so this is a lovely way to say thank you to all those who have attended throughout the season and wish them well for the year ahead. Tote Ireland are a constant presence at Punchestown, as they are at every track around the country, and they share in the gesture of sincerely thanking everyone for their support.  Now it’s our turn to thank Ross, Lynda and the Tote Ireland team for their continued support”.

Punchestown is proud to host the final race meeting in Ireland each year before passing the baton to our colleagues in Fairyhouse who raise the curtain the following day. Action at Punchestown on Free Tote New Years Eve meeting gets underway early with racing starting between 11.45am and 12 noon. Given the festive theme of the day the Race & Dine packages tend to be very popular so early booking is recommended. Please visit www.punchestown.com or Punchestown social media platforms for full information.

Household Names To Go Up A Gear At Naas This Weekend