KILDARE’S senior hurlers escaped with a win from a scrappy assignment away to Wicklow to record their second Kehoe Cup success this afternoon in Bray. It was an outing best forgotten though with David Herity’s side looking leaden-footed and enduring a severe bout of the “yips” with their shooting. 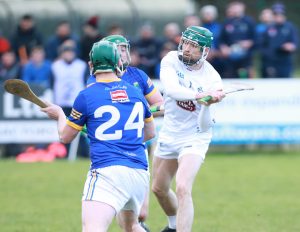 In all, not even counting the numerous efforts dropped short, Kildare hit around 25 wides over the seventy minutes, with new captain James Burke having a poor day at the office from that perspective.

They could have lost though, and credit to them for overcoming the shock of a Seanie Germaine goal in the 57th minute that suddenly propelled a dogged Wicklow team into a 1-11 to 0-11 lead.

Wicklow matched Kildare step-for-step in an even first-half with the Lilywhites struggling against a stiffish wind and a tight-marking defence, despite the best efforts of the lively Cian Boran. Corner-forward Boran, one of three brothers starting for Kildare, weighed in with three excellent points in that opening period and might have had a couple of goals but for the efforts of Wicklow ‘keeper Cian Staunton.

Kildare went in 0-7 to 0-6 ahead but their shooting travails continued after the break and three Mikey Lee frees helped Wicklow level proceedings at 0-9 each after 49 minutes.

But two fine scores from Gerry Keegan and Rian Boran seemed to set Kildare up for a reasonably straight-forward finish. Wicklow had other ideas.

Lee scored a beauty from an acute angle, substitute Torna Mulconry followed up with the equaliser and when Padraig Doyle was allowed a clear direct run from deep, he offloaded to full-forward Germaine who buried it in debutant Sean Burke’s net.

Kildare settled back into the task though with Cian Boran coming alive after a quiet third quarter, making and scoring his fourth point on 58 minutes. A minute later Burke drew a brilliant save from Staunton with a shot headed for the top corner. Burke converted the subsequent ’65 and went on to add the equaliser on 65 minutes and the winning free five minutes later as Wicklow ran out of puff somewhat.

“They moved us all over the place, they were much more aggressive in the tackle as well. Our lads had to adjust at half-time and I suppose our fitness just about got us through in the end.”

Regarding the “ridiculous amount of wides,” he didn’t think “they were from ridiculously poor angles, it was just one of those days when the ball just didn’t seem to go near the posts. It shows good character to get over the line as well.”

Herity alluded to some heavy training that might have explained some of the legginess, though you got the impression that excuse wouldn’t wash within the dressing room.

“We are doing a lot at the moment, obviously trying to build up as much as we can towards the league, where you have five games in seven weeks. Still, it’s work-rate though. What it comes down to is our work-rate was very poor in the first half. The stats show that. We weren’t getting in the tackles, we weren’t moving, we weren’t reacting.”

Plenty to work on for the Kildare set-up, with Herity relishing the tough schedule. He expressed a strong preference for competitive Kehoe Cup games rather than trying to organise challenges at this time of year, despite the difficulties involved in players being involved in college competitions. As if to illustrate that point, Kildare only had 22 players available for today’s game.