PIPERS Hill College, Naas, overcame the disappointment of losing last year’s Final by capturing the Pinergy All Ireland U19B Schools Cup Basketball Final with a 17 points win over Teresian School from Stillorgan in Dublin in the National Basketball Arena on Tuesday morning. 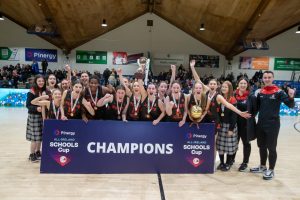 The Naas school held a slender 8-6 lead at the end of the first quarter but they had stretched that out to eight points (17-9) by half time. Pipers Hill continued their dominance in Quarter 3 after which they held an unassailable 27-11 lead eventually finishing out Quarter 4 with a 17 point difference.

Liffey Celtics’ Mya Pardy ended up as top scorer with 19 points for Pipers Hill for which she was awarded the MVP Award while her club and school colleague Stephanie Nnabuihe ended up with 16 points as the Naas School celebrated a famous victory. Helena Keane was the top scorer for the Dublin School.