Superb Second Half Sends Naas Through To Leinster Semi Final

A superb second half performance by Br Bosco Cup holders, Naas CBS, in Hawkfield on Tuesday, in which they kept Colaiste Eoin scoreless, was enough to send them into a Leinster semi final in about two weeks time. 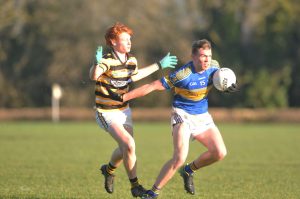 Ryan Sinkey was on the scoresheet for Naas CBS in the Qr Final defeat of Colaiste Eoin on Tuesday Photo: Martin Rowe

The match was delayed for 35 minutes while the search for a relatively frost free pitch at the Kildare GAA Centre of Excellence  was undertaken, with Pitch 4 eventually passing the test for Dublin Referee, Brian O’Connor.

Colaiste Eoin started the game on the front foot and were two points to the good by the 6th minute through Diarmuid O Cinneide and the lively Jamie O Conaire. The defending champions were level by the 10th minute through a ’45 from goalkeeper, Fintan Quinn and one from play from midfielder, Austin Brennan and they went ahead for the first time through the superb Carl Lennox in the 13th minute.

Colaiste Eoin gained the initiative again and with the help of a goal from an acute angle from O Conaire the Dublin school led 1-5 to 0-5 at half time.

The introduction of Tom Kelly and Ciaran O’Reilly during the second half seemed to give Naas renewed vigour and once they drew level through a Lennox free in the 48th minute there was no stopping the Leinster and All Ireland champions. Substitute Kelly put them ahead for only the second time in the game two minutes later and from there till then end Naas added some superb scores through Kelly, O’Reilly and of course from Lennox as the Dublin school failed to raise a flag during the entire second half.