Eadestown native Jimmy O’Brien believes he has become a much more assured player as a result of his experience with Ireland in last November’s Autumn Nations Series. 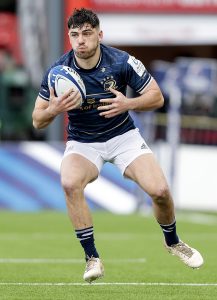 Having featured in both midweek games against the Maori All Blacks on the 2022 summer tour of New Zealand, the former Newbridge College student was hoping for an opportunity to secure full international honours in the end-of-season test games. It looked initially like a run-out for Ireland ‘A’ against their New Zealand counterparts at the RDS on November 4th was going to his best chance to impress, only for an injury suffered by his Leinster colleague Robbie Henshaw to propel him onto the replacements bench for the following day’s tantalising clash with world champions South Africa in the Aviva Stadium.

There were just 27 minutes gone on the clock when inside centre Stuart McCloskey was forced out of the action and O’Brien suddenly found himself making a senior debut for Ireland at the 15s grade. After a commendable showing against the Springboks, he started at full-back and on the left-wing respectively for subsequent triumphs over Fiji and Australia in the same venue.

Given Ireland head coach Andy Farrell trusted him to fill so many different roles over the course of a packed window, it would come as a major surprise if O’Brien was named in the Wigan man’s squad for the Six Nations Championship later today. If this did come to pass – and he added to his three caps to date – it would be a dream come through for the 26-year-old.

“It gave me a lot of confidence to play at that level and that the coaches saw me, trusted me and had me trying to play in different positions. Like when I played 13, then 15 and on the wing. That gave me a lot of self confidence,” O’Brien explained at a Leinster media conference on Monday.

“I’d love to play in the Six Nations. It was a dream when I was a kid. I watched it every year, so it would be amazing. I would be delighted to get in and hopefully I’ll get in on Thursday.”

It has been quite easy for O’Brien and his fellow Leinster hopefuls to not think about an impending international squad announcement, given the eastern province have a big European game coming up this Saturday. Top 14 outfit Racing 92 will be the latest side to face the Blues in Pool A of the Champions Cup with over 42,000 tickets already sold for what could be a blockbuster showdown at the Aviva Stadium.

Although Leinster are already guaranteed a spot in the knockout rounds of Europe, there is still plenty of incentive for Leo Cullen’s men heading into this weekend’s fixture at Irish Rugby HQ. A fourth successive pool stage win will be enough to secure top seed for the four-time champions, which would consequently keep them on home soil for the remainder of the competition.

In addition to potential home games in the previous three rounds, this season’s Champions Cup decider is being held at the Aviva Stadium. Having played there on a number of occasions during Leinster’s march to a 2021/22 European showpiece – where Ronan O’Gara’s La Rochelle got the better of them in Marseille – O’Brien is excited by the prospect of a more consistent residency in Lansdowne Road.

“It makes some difference playing at home, especially in the Aviva. I think if you talk to anyone, some of the days in the Aviva are some of the best days even. Off the top of my head, last year against Toulouse was unbelievable in the semi-final. It’s huge. If we can get a win this weekend and try to secure that spot, we can get home advantage.”

While versatility has proven to be a key asset for O’Brien, the same is true for another Kildare star in the Leinster squad. Like O’Brien, Jamie Osborne is a product of the Naas RFC underage system.

Following a breakthrough 2021/22 campaign that saw him making 13 first-team appearances at provincial level – 11 of those being starts – Osborne has continued to excel in the current season. After starting in both centre positions and full-back last term, the Naas CBS graduate lined out on the left-wing last October in a United Rugby Championship success over arch rivals Munster at the Aviva Stadium.

In last Saturday’s Champions Cup game away to Gloucester, Osborne seized upon another opportunity to showcase his talents by producing a player of the match performance from inside centre in a 49-14 victory at the expense of the English Premiership side.

It seems like only a matter of time before Osborne adds a senior cap to the appearances he accumulated for Ireland at U20s level and his recent displays have caught the eye of his fellow Lilywhite.

“He was unbelievable at the weekend. I was delighted for him. Another player who can play a couple of positions. I think he was 15s underage, 13 and 12. I think he played one on the wing, and I was on the other wing, against Munster earlier in the season,” O’Brien added.

“I don’t know where that comes from. I don’t think it’s anything about Kildare lads, maybe it’s playing GAA or stuff. He played a good bit, I was chatting to him before. I think it probably helps when you’re younger, playing GAA. I was delighted for him at the weekend.”