In this week’s Kildare Nationalist we carry a report on Leixlip Amenities Liffey Celtics defeat to Killester in the MissQuote.ie Women’s Basketball Super League at home last Saturday night.

LEIXLIP Amenities Liffey Celtics Head Coach, Karl Kilbride insists his players will need to demonstrate a more ruthless streak after seeing them ship a 72-79 point loss at home to Killester in the MissOuote.ie Women’s Super League on Saturday night. 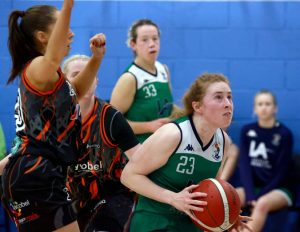 In what was their third defeat on the bounce, the hosts coughed up a number of opportunities to put more daylight between themselves and their opponents at various points throughout the match, and they were duly punished by a Killester side that put together a decisive fourth-quarter surge.

Indeed Celtics were five points to the good by the halftime recess and led by three in the early stages of the fourth quarter, but their inability to put the visitors to the sword resulted in a loss that leaves them six points adrift of the play-off berths.

“We’re really disappointed with the result especially the second-half performance” Kilbride told The Kildare Nationalist. “I thought we should have been more than five ahead at halftime, but we left some scores behind us. We were really poor rebounding and we can’t win games giving teams multiple opportunities the way we have. That’s something we need to get better at in a hurry.”

“Killester are a really good team. They’re in the [National] Cup Final and they’re in the final for a reason. But it’s disappointing, because we feel like we have the talent there to be challenging at the top. But right now we’re just not executing” he sighed.

Nothing separated the two teams by the close of the first quarter on Saturday with Liffey’s top scorer, Justice Coleman serving up some big efforts on her way to a 20-point haul.

Chyna Latimer and Chanell Williams were as equally effective for Killester, the two combining for 35 points on the night, while Michelle Clarke weighed in with a further 14.

Still it was Celtics who enjoyed the better of the second quarter, edging 41-36 in front by the break as Coleman continued to find her range and Áine O’Connor punished from a mid-court steal and offensive rebound.

Yet even a sublime third-quarter display by Sorcha Tiernan, that featured a basket and two three-pointers in quick succession, could not prevent Killester restoring parity by the close of the third.

Ieva Bagdanaviciene and Ella McCloskey were starting to make their presence felt on the scoreboard for the visitors as Liffey found it increasingly difficult to cope with their opponents’ switch from zone to player defence.

Wasted scoring opportunities continued to mount for Liffey while Killester maintained their poise under the boards to secure a win that keeps them level with Waterford Wildcats in fourth place.

Kilbride admitted his focus, right now, is more geared towards avoiding relegation than securing a play-off berth ahead of the visit of title contenders, Glanmire in less than a fortnight’s time.

“Right now you’re looking at staying out of relegation” he said. “With the way we’re playing, that’s the first goal and that’s really disappointing with all the talent we have.

“Glanmire are excellent. They’re right up there with the best in the country and that performance [against Killester] won’t be enough. But we have the talent there, we’ve just got to put in a performance.”