Kilcock Start the New Year With A Bang

Our report in this week’s Kildare Nationalist, out now or online at www.kildare-nationalist.ie, of Kilcock Celtic’s good start to 2023 in the Leinster Senior League

KILCOCK Celtic returned to league action for the first time in 2023, winning convincingly 3-0 against Tallaght outfit Marks Celtic in the Bawnogues on Sunday morning. 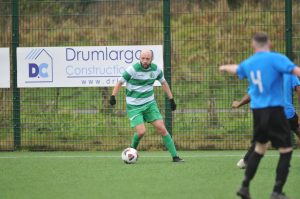 Kilcock started the game well early on, quickly imposing their game on the opposition and coming close to breaking the deadlock a couple of times. Similarly to last week, Kilcock took an early lead when Eoin Hannigan scored in the 15th minute. The Celts continued to push and came close a couple of times to doubling their lead but efforts by Matty Harris and Mike Brown were well saved by the opposition keeper.

Just after the half hour mark, the momentum in the game switched and Marks Celtic began to look dangerous on the break, putting the hosts on the back foot, but the defence was well marshalled by centre backs Daragh McArdle and Dylan Bradley. Just before half time, Kilcock slowly began to re-establish their dominance and were unlucky not to double their lead before half time with the score remaining 1-0 at the break.

The North Kildare side started sharply in the second half and began to impose their game on the opposition once again with Eoin McArdle and Josh Sherlock pulling the strings in the centre of the field. The Celts once again had numerous chances to double their lead but just couldn’t take the opportunity with Eoin McArdle hitting the post, coming the closest. That was to change in the 60th minute when Kilcock finally scored through the head of Josh Sherlock from a superb corner delivered by Dylan Bradley.

Marks Celtic were reduced to 10 men mid way through the half after their player was sent off for violent conduct. In the 70th minute, Kilcock made a couple of substitutions to freshen up the game with Daniel Gilbert coming on for Matty Harris and Ben Kelly coming on for Conor Lawless. The Celts continued to apply pressure and in the 80th minute, that pressure paid off when Ben Kelly scored an audacious effort from outside the box. His first competitive goal for the club and a goal which had all but put the game beyond Marks Celtic. Kilcock pushed to get a fourth goal, with Daniel Gilbert unfortunately hitting the post. However the fourth goal proved elusive in the end as the hosts ran out deserved winners in the end.

Kilcock Celtic’s Saturday team lost to Booth Road Celtic FC 3-2 at home in the Bawnogues in the Leinster Senior League Division 3B Saturday.