Maynooth Bow Out Of Sigerson Cup

MAYNOOTH University’s Sigerson Cup campaign came to a premature end on the 4G pitch at Abbotstown on Thursday night as they suffered a second round defeat to MTU Cork after a thrilling battle. 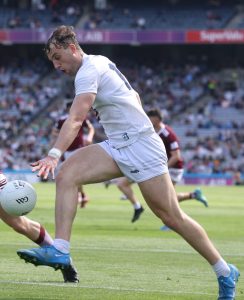 The Munster side overcame a poor start and the loss of centre-back Paul Ring to a second yellow card in the 44th minute to power home with a strong finish against the Division 1 League winners, for whom nine Kildare players made an appearance.

Corner forward Ryan O’Donovan was the star turn for the winners with an outstanding display of point-scoring, weighing in with ten points, five from play, in an end-to-end encounter.

The Kildare university had a dream start with local lad Fionn Ó Giolláin finding the net after only two minutes and points from star forward Darragh Kirwan, who finished with six, and Sligo’s Donal Conlon saw them 1-2 to no score ahead before an O’Donovan free settled MTU Cork.

In the 24th minute midfielder Liam Smith’s improvised flick to the net brought MTU back into it and by half-time they trailed by just a point, 1-6 to 1-7. Shortly after the interval they pierced the Maynooth defence again with Ring palming home at the far post.

Maynooth recovered immediately, though, with Conlon taking a high ball from the excellent Dermot Hanafin and burying it to the net and they were still leading by a point when Ring was sent-off. Disappointingly, Maynooth didn’t push on though and with O’Donovan scoring some fine points they were outscored by 1-4 to no score in the last ten minutes of playing time, Dylan O’Connor weighing in with their third goal deep in injury time.