Strong Kildare Team Named For Kehoe Cup Meeting With Down

KILDARE Hurling manager, David Herity, and has Management Team, have named what could be quite close to his Allianz League starting XV for Sunday’s Kehoe Cup Round 4 game against Down in Hawkfield, throw in 1pm. 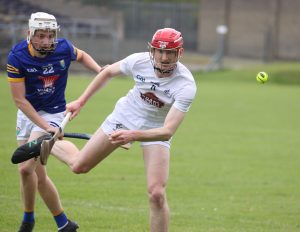 New Kildare captain, James Burke, will lead the line from the ’40 as Kildare host Down in the Kehoe Cup Round 4 game in Hawkfield on Sunday Photo: Sean Brilly

There are nine changes from the side which started in that tight victory over Wicklow last Sunday with some of the more familiar figures returning while the likes of Cormac Byrne, Harry Carroll and Jack Higgins get another run.

Simon Leacy returns for this game in his more familiar right corner back role and Cian Shanahan gets the centre half back spot. Cathal McCabe and Paul Dolan team up again in midfield while captain, James Burke, leads the line from the ’40 and former captain, Brian Byrne, gets his first start of the season.

Games between Down and Kildare have always been tight, exciting affairs, such as the 2020 Christy Ring Cup final and last year’s League match in Ballycran with the Lilywhites successful on both occasions. Although the Mourne men have lost both of their Kehoe Cup fixtures to date they are sure to provide tough opposition to a Kildare team that was sluggish in the win over Wicklow.

Both teams will have to be on their best behaviour as the match will be refereed by Dundalk based Redemptorist priest, Fr Derek Ryan, who refereed the 2021 Louth county football final.