The Grace Clifford interview which we carried in this week’s Kildare Nationalist out now or on line at kildare-nationalist.ie

IT’S true that Kildare captain, Grace Clifford, gained three stones over the New Year but there are no concerns about the state of her fitness as the stones were in the ring that fiancé, Maurice got down on one knee to present to her on New Year’s Eve. 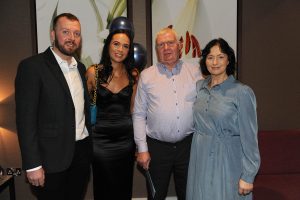 There are no worries, either, that Eadestown will lose a daughter as Kilbrittain, Cork native, Maurice, a noted footballer and hurler, will move to the area gaining a son for the Sky Blues and maybe a footballer or hurler for the area.

Now as she enters her 13th year with the Kildare team, and her fifth as captain, Grace Clifford will have the preparation for the forthcoming nuptials on her mind as she prepares for a football season that begins with a home LIDL Ladies League Division 3 game against Down on Sunday.

“Football is nearly part on my identity,” Grace Clifford responds when we ask what motivates her to keep going each year. “I’m never going to put a timeline on when I will finish but I’ll know that when I can’t give it 100% physically or emotionally it will be time to go. I just love it the professionalism and the competitiveness. But then there’s the group of girls, and even those who have come in this year, they keep you young. It’s just that dynamic of everyone with different backgrounds working towards the one goal to win an All Ireland and that dream of being in Croke Park together,” she explains.

“Every year is a new special journey and each year brings its different challenges and new people freshen things up and keep you going,” the captain adds. Speaking of the talent that has now come into the squad Grace Clifford says, “these new players are absolute contenders for a starting spot, they’re setting the standards. I’m thinking of my own clubmate, Ruth Sargent, who is wise beyond and her years and she’s starting at centre half back for UCD on the O’Connor Cup team. Then we have Amy Larn, a fantastic athlete with a great attitude. All these new players have given us a new lease of life, you’d swear they had been playing senior football all their lives.”

Referring to her new manager, who coached the team last year, the Eadestown player said, “ Diane O’Hora is an infectious person. She has always been very professional, very well organised and the fact the she got the job has brought continuity for us. Equally she brought in a backroom team that has lifted us as well, like Briain Noonan, an extremely intelligent coach, Con Brennan, who was involved with us in the past as well as Noelle Earley, a really well balanced backroom team.”

“Diane has done it all, won All Irelands, won All Stars yet she reminds you of a child at Christmas, her enthusiasm levels never drop. We all want to play for her,” Grace adds.

The captain sees no easy games in Division 3. “Down have always been tricky opposition, playing a defensive type of football, and the weather conditions will be tricky as well so it’s going to be a battle and a half. It’s harder to get out of Division 3 than it is to stay in Division 2. It’s a mix of difficult teams to play but our ultimate goal is to get out of the Division and that has to begin with a win against Down on Sunday.”

“This year we are tapping into what is our identity, what is our style, who are we as a team on the pitch and I think that is going to stand to us. Every time we put the Kildare jersey on we want to represent it the best we can. We are wearing it on behalf of our family, our friends, where we’re from and that’s the motivation on and off the field,” the captain concludes.