KILDARE hurlers chalked up their third successive win in the Kehoe Cup against Down in Hawkfield on Sunday afternoon with a performance that couldn’t have been more different to that against Wicklow the week before. 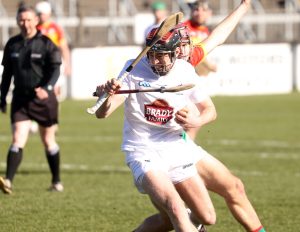 With Brian Byrne back bringing his usual composure to the sweeper position, Jack Travers on fire at wing back and Cathal McCabe his usual workaholic self in midfield, David Herity’s side laid an early foundation with the game’s first six points, quickly putting the wastefulness of the Wicklow game behind them.

Travers, who took a lot of punishment from the Down men, got Kildare off the mark within two minutes and further scores from McCabe, Cathal Dowling, Paul Dolan and two James Burke frees gave them a confidence-boosting start.

Down, who shot ten first-half wides, got themselves onto the scoreboard after 16 minutes from a Chris Egan free but Kildare continued in the ascendancy. Burke had an exceptional game, showing all his class, and three points from him and further scores from Travers (2), McCabe (2), Johnny Byrne, substitute and Declan Flaherty helped them into a 0-15 to 0-5 half-time lead.

Down lifted their game in the second half, which was a much more even affair but with Kildare using all of their outfield substitutes the game lost its pattern somewhat. That said a tally of 26 points is not to be sneezed at, even if the Lilywhites didn’t manage a goal scoring opportunity over the course of the seventy minutes.

At the other end Down threatened a couple of times to raise a green flag but Paddy McKenna produced a fine save from a low Oisin McManus drive and another from Tom McGrattan and was solid throughout.

Kildare can sew up the Kehoe Cup title with a draw against Meath next Saturday lunch-time in Rathmolyon.