THE North Leinster Post-Primary Schools Senior Hurling ‘C’ Final was brought to an abrupt and upsetting end on Monday afternoon when a Roscrea player required emergency treatment on the field of play. 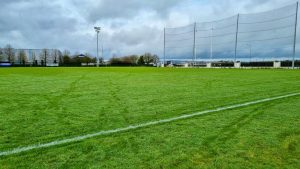 Scoil Mhuire, Clane and and Cistercian College, Roscrea had gathered in Portlaoise’s Centre of Excellence to contest the final, but the game was brought to a halt inside two minutes.

Roscrea had taken an early lead and were on the attack again when it was noticed that one of their players needed emergency treatment in front of his own goal.

Play was stopped immediately and the Portlaoise ambulance service arrived with fifteen minutes. The game was called off and will be refixed at a later date.

We would like to wish the Roscrea players a speedy recovery.