AS was announced at the Kildare County Board meeting a number of months ago Brady Family has renewed its sponsorship of Kildare GAA, Kildare Camogie and Kildare LGFA for four more years and the official announcement was made at a photoshoot on Wednesday. 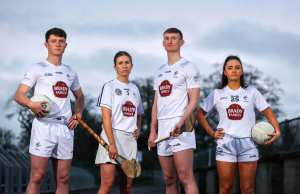 Disappointingly the official announcement was made a day after the publication of the local newspapers.

The family-run, Timahoe, Kildare based company have been a sponsor of Kildare GAA since 2013. This sponsorship agreement will extend the Brady Family sponsorship and support of Kildare GAA to 14 years. The company says they are one of the only Irish-owned companies which support all three associations within the Gaelic Games Family through its sponsorship of Kildare Camogie and Kildare LGFA also.
Speaking at the announcement John O’Brien, Managing Director of O’Brien Fine Foods said; ‘We’re delighted to be renewing our sponsorship of Kildare GAA, LGFA and Camogie for another 4 years. Brady Family is founded on family connections and traditions, it is a privilege to be able to renew our support for Kildare GAA and the central role it plays in community life. This partnership is one we are very proud of, and we look forward to building on everything that has been achieved over the last 10 years and to even brighter futures ahead.”

Mick Gorman, Chairman of Kildare GAA responded by saying, “We are delighted to renew our sponsorship agreement with Brady Family for an additional four years. Brady Family have been fantastic supporters and promoters of our county teams in Kildare over the last ten years. We thank them for their continued commitment in moving forward with us for another four years. This new agreement represents Brady Family’s strong endorsement of Kildare GAA. We look forward to continued successes together in the coming year.”

Kildare Camogie Chairperson, Margaret Sexton, added, “Kildare Camogie is indebted to Brady Family for their continued support of
camogie in Kildare. Without the support of local sponsors who care deeply about their community, the valuable work done by Kildare Camogie would not be possible. Female sport in particular needs support and thousands of camogie players in Kildare have
benefited in so many ways directly due to the generosity of Brady Family.”

Speaking about the sponsorship deal, Kildare LGFA Chairperson Mag O’Neill said  that: “We are delighted to have Brady Family onboard as principal sponsor of Kildare LGFA for the next four years. Over the past four years we have worked together with
Brady Family to build a solid partnership which has seen continued growth and success for both parties. The continued support of Brady Family for ladies’ football in Kildare shows the great strides the sport has made over the past number of years and shows their
confidence and support in our continued success.”

The Brady Family logo will appear across the jerseys, leisurewear and training gear for all Kildare football, hurling, ladies’ football, and camogie teams over the next four years.