THERE was disappointment for Naas CBS as they narrowly went under to Blackrock College in the Quarter Final of the DR Tony O’Neill Leinster Schools Senior Quarter Final at Naas Sports Centre on Tuesday. 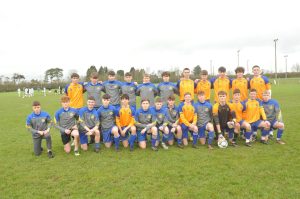 Naas CBS were appearing at the Leinster Quarter Final for only the second time in their history and just missed out on becoming history makers, despite an exceptional performance from the players.

Blackrock College made the more positive start and they were a goal to the good in the 10th minute when they scored from a deflected cross.

This setback only served to inspire Naas CBS who owned the gam until the 49th minute when Blackrock got in for their second goal with only their second shot on target.

Naas were back in the game though on 79 minutes when Adam Maguire coolly slotted home leading to a grandstand finish.  Naas peppered the Blackrock goal, and on four occasions had the ball cleared off the line.

For only the 2nd time in our history we reached the senior Leinster Cup 1/4, and just missed out on being history makers.

Naas CBS now move on to the Midlands League semi final on Friday where they have a derby game against Kilcullen.