Our feature interview with Larry Tompkins as it appeared in this week’s Kildare Nationalist in your shops now or online at www.kildare-nationalist.ie

LARRY Tompkins is one of the Fab Four who will be put through their paces by Newstalk’s Ger Gilroy at the sold out Kildare GAA Corporate Lunch in Lawlor’s Hotel, Naas on this Friday. Joining him on the “couch” will be Derry’s Joe Brolly, Donegal’s Michael Murphy and Kildare’s Willie McCreery. 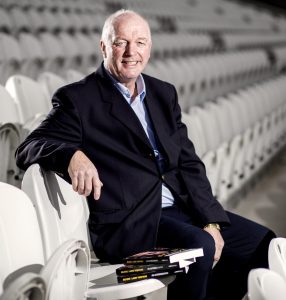 Eadestown native, Larry Tompkins, will be on the Panel at the Kildare GAA Corporate Lunch on Lawlor’s Hotel, Naas on Friday Photo: Laszlo Geczo

Eadestown native Larry is the subject of a question from the late Jimmy Magee’s Know Your Sport Quiz he tells me when I caught up with him last week to chat about Friday’s event. Who is the only man to captain four different counties? The bold Larry is the answer: Kildare, Wicklow Schools, Cork and of course the Donegal team in New York!

Having sold his businesses in Cork recently Larry is “taking it easy now”, he tells me. “Wheelin and dealin in a little bit of property, “ he adds quickly. After being in the hospitality business for so long, Larry says he now has the leisure of being able to go to the odd game now. “I go into a few schools and I give a hand out there and I’m involved with the Juveniles up in Bishopstown where my son plays and it’s making me feel a bit younger when I’m dealing with youngsters,” he laughs.

Larry Tompkins has fond memories of growing up in Rathmore, Eadestown as a family of seven siblings, where he says it was a simple life. “My father and mother never drove and probably never had the money to buy a car; we had no electricity, no running water initially. We walked to school three or four miles and following school linked up with a few of the neighbours like the Sergeants, the Fitzpatricks and the Dunnes and we went out into the fields, particularly in the summer time, and we wouldn’t be in until 10 o’clock at night.”

“I have two brothers still living at home; they were cute out, they didn’t get married,” he laughs again. “As an upbringing and as a mother and father I couldn’t have got any better,” he recalls.

Remarkably Larry Tompkins played three years as a minor and five years as an U21 and played senior with Kildare “I was shooting up good scores as a young fella and I got on to the minor team when I was very young and played three years as a minor. I have the record, that I don’t talk about too much, of losing two Leinster Finals in the space of six days, a minor final to Meath and then losing a Leinster U21 final to Dublin (after a replay).”

Tompkins was called on to the Kildare senior team as a 16 year old in 1979 by Eamonn Donoghue for the National League as army man, Tommy Shaw, the free taker, was unavailable, and he travelled with the team to Dr Hyde Park as a free taker. “He didn’t have to ask me twice but I didn’t expect to be on the team but they started me and I played on Gerry Connellan who was an All Star the following year. Between minor, U21 and senior I was never off the team from then.”

Pondering further on the Kildare players, “serious players”, of the time the Eadestown native thinks “what could have been if the set up had been right. It’s an awful shame that the process wasn’t right and it was a massive loss for Kildare that the amount of real good talent that was in the county at that time, like my own brother Joe and John Crofton, serious players who weren’t worked on.”

Tompkins’ departure from Kildare and eventual transfer to Cork is well documented at this stage but he is adamant that he never had anything but good will from Kildare people. “The amount of letters and cards that I got from Kildare people in relation to me being successful and wishing me all the best was incredible,” he says. “I know that Shea Fahy would say the same thing. Kildare have a serious band of supporters and supporters are not fools, they knew what was going on. They knew the set up in Kildare at the time but I was just blown away with the amount of letters that I got coming up to big games.”

“People knew me as the player that was committed and I never betrayed Kildare and I never missed a training session. Of course I felt sorry not playing with Kildare. There was a banner across the town of Kildare saying “Welcome Home Shea and Larry. Best of Luck” and that banner remained up in Kildare when we were in big matches. Amazing! I can only thank Kildare people for their support.”

Looking at the GAA season and in particular pre-season competitions Larry Tompkins believes there are too many games to pack in now. “Intercounty teams would want games leading into the National League because the League is so competitive but everything seems to be so compacted in now which I can’t understand. I think the All Ireland’s are played way too early, I’d love if they were pushed back. I would nearly advocate going with the club first where the intercounty manager would have an opportunity to look at players playing with their heart and soul and pride in the club championship.”

Tompkins too is not short of holding a view in relation to the football playing rules. “I’m not really enjoying football at the moment. Overall it’s a very difficult game to watch now. They decided to give the goalkeepers a kicking tee so that should mean that they’ll kick the ball out long. Since they gave them the tee every goalkeeper now kicks the ball short,” he says. “It doesn’t make sense. The ball should be kicked beyond the ’45 and straight away you would have a different type of game with one rule change.”

Larry Tompkins is looking forward to attending the Kildare Corporate Lunch in Lawlor’s on Friday and attendees there will hear more of his firmly held views on the game he loves and graced for many years as a player and manager.

As well as the Panel Discussion with Tompkins, Joe Brolly, Michael Murphy and Willie McCreery there will be entertainment from Richard Lynch and the many voices of Aiden Tierney and there’s a Raffle with many top prizes. Yours truly will act as MC.